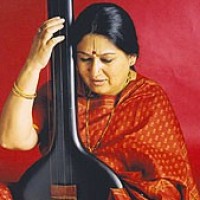 Trained by stalwarts such as Ram Ashreya Jha, Vinay Chandra Maudgalya, Vasant Thakar, Jitendra Abhisheki, Kumar Gandharva, and Naina Devi, Shubha Mudgal is today one of the most versatile and popular performers in India. Equally at ease with khayal and thumri-dadra as with Indipop and contemporary cross cultural experiments, Shubha is also recognized as a composer.

She is the recipient of several awards:

• Best Music Direction in a non-feature film for her music in the documentary "Amrit Beej" by Meera Dewan, at the National Film Festival of India, 1996
• Aadharshila Award 1996.
• Kalashri Award from Raja Ram Mohan Roy Education Foundation 1997.
• Gold Plaque Award for Special Achievemnt in Music at the 34th Chicago International Film Festival 1998
• Padma Shri from the Government of India 2000

She has also been closely involved with several projects related to music education in India. Currently a member of the Central Advisory Board of Education constituted by the Government of India, Shubha also chaired a focus group discussing the need for introducing an arts education program in mainstream school education during the National Curriculum Framework 2005.

Songs of the Seasons Volume 4