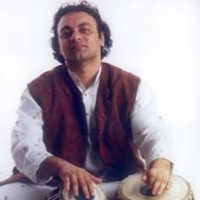 The terms laggi, laggi-chanti, laggi-nada, are used synonymously, though some sources differentiate between them. Laggi refers to the section in a thumri-dadra recital, which allows the tabla player to change from the original Deepchandi, Jat, Kaherva or dadra thekas (depending on the vocal composition) and launch into Kaherva or dadra based variations. The vocalist changes the scansion of the composition to fit into an eight or six matra framework and maintains this as the theme, while the focus remains on the tabla. The laggi section was originally linked to the dance element in a thumri-dadra rendition, during which the tabla player would reproduce, anticipate and suggest patterns that would correspond to the dancer's footwork. With the passage of time, thumri-dadra renditions do not include the dance element, unless they are expressly performed as part of a kathak recital, but the laggi section continues to be an integral part of the presentation of this song-form.

conventionally, this section was not included as part of the tabla solo repertoire, though one comes across recordings of some maestros and contemporary performances showcases this section as a separate item in a complete album. Aneesh's own reasons for including this track are many. He had some amount of training in laggi playing, though most people believe that training is not required for this form. Interestingly, many believe that separate traning for thumri-dadra is also not required.This understanding could be because so many musicians treat these forms as lesser entities, oe else, because they consider the succesful rendition of these forms to be more the result of an intuitive 'feel' rather than systemised training. Training and experience have however convinced me that these forms require as much study as intituitive interpretation.