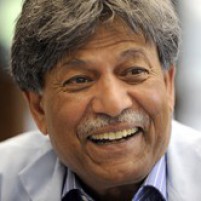 Ashraf Aziz was born in Tanga, Tanzania, into a small British Indian community in diaspora. His ancestors were brought to East Africa from Sialkot, now in Pakistan, in the 1890s to help build the railway. His parents decided to make Tanganyika (now Tanzania) their home where he was born during the World War II.

He received his schooling in East Africa. But his real schooling had started much earlier at home – in Hindustani film songs, which became a life-long passion. After attending the Makerere University (Kampala, Uganda), he was awarded a scholarship to come to the United States in 1965, where he completed his PhD in zoology at the University of Wisconsin-Madison in 1974. In the same year he became an instructor in the anatomical sciences at Howard University, College of Medicine, Washington, DC, where he is currently a professor. He continues to do research in the anatomical sciences as well as the popular culture of south Asia. He calls himself an American of Indo-Pakistani origin with an African experience.

Light of the Universe : Essays on Hindustani Film Music

Starting with the premise that Hindustani cine-song and…