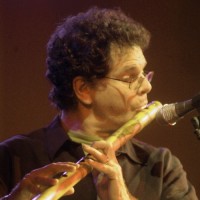 Steve Gorn learnt flute from Gour Goswami, of Kolkata,  Deba Prasad Banerjee and Raghunath Seth of Mumbai. He has also studied with late Z. M. Dagar. His flute is featured on the 2011 Grammy winning recording, “Miho – Journey to the Mountain” and the Academy Award winning Documentary film,  “Born into Brothels”. Steve has performed Indian Classical Music and new American Music on the flute in concerts and festivals in India and throughout the world.