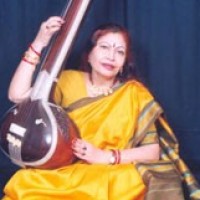 Sumitra Guha received her initial training in music from her mother. At the age of 11, she began training in Carnatic Music under the acclaimed S. R. Janakiraman. It was at Viswa Bharati University in Shantiniketan where she was a student of Philosophy that she found herself getting drawn to Hindustani music.

In 1964, Sumitra Guha started learning Hindustani Classical music under vocalists A. Kanan and Malobika Kanan. She assimilated both their styles in her music, and later received instruction from Sushil Kumar Bose, the accomplished disciple of Ustad Bade Ghulam Ali Khan.

An artiste of All India Radio and Doordarshan, Sumitra Guha has toured widely in India and overseas. She also founded the Sumadhur Hansadhwani School of Music where music is imparted in the Guru Shishya Parampara style.