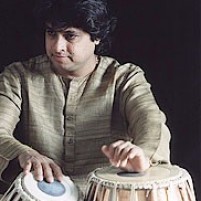 Tabla player Sandip Bhattacharya, a disciple of Ishwarlal Mishra of Banaras and Arvind Mulgaonkar of Mumbai, has studied the Banaras, Farrukhabad and Ajrada gharanas. Originally a resident of Banaras, Sandip is currently based in Holland. He has performed and recorded with several vocalists and instrumentalists. He has also composed music for theatre, ballets, films and for his fusion group called ‘Synergy’.