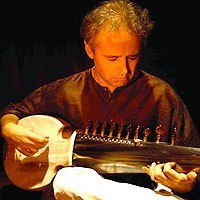 Hailing from Melbourne, Australia, Adrian received intensive training on sarod from Ashok Roy, a senior disciple of maestro Ali Akbar Khan, for more than two decades. After this he took advanced training from Sachindra Nath Roy, a disciple of Alauddin Khan and Inayat Khan. Adrian’s playing follows the Maihar gharana of Hindustani music. He has also taken additional guidance from the well known vocalist and musicologist Dr. Ashok Ranade.

Adrian has studied, worked and performed in India and has also undertaken tours of Europe and Asia. He performs extensively in Australia.

His performance skills have been complemented by intensive research into Hindustani music. Apart from holding a PhD in music he has written widely on Hindustani music including, the authoritative book sarod entitled “Inventing the Sarod: A Cultural History”.

He is currently based in Sydney where he is also a lecturer in the Dept of Contemporary Music Studies, Macquarie University.

Inventing the Sarod: A Cultural History

This is a major musical and cultural history of the sarod, a leading stringed…