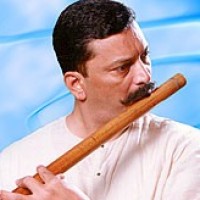 Nityanand Haldipur began his training in flute playing from his father Niranjan Haldipur and continued his advanced training under Devendra Murdeshwar, chief disciple of famous flute maestro Pannalal Ghosh. Nityanand also studied with vocalist Chidanand Nagarkar. In 1986, Annapurna Devi, doyenne of the Senia-Maihar gharana and daughter of Allauddin Khan (Baba), the preceptor of the gharana, accepted Nityanand as one of her disciples. Nityanand has been privileged to receiving intensive guidance from her, thus enabling him to assimilate the subtleties of the Senia-Maihar style. Consequently, his playing is marked by the dhrupad-ang alap, jod as part of vilambit compositions, and drut compositions incorporating rhythmic interplay.

Nityanand has performed widely in Indian and abroad. His performances at festivals like the SAARC Festival and the Apna Utsav series have received critical acclaim. Nityanand is also open other musical styles and has participated in cross-cultural musical experimentation.