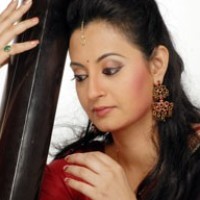 Meeta Pandit is the grand daughter and disciple of Gwalior gharana maestro Krishnarao Shankar Pandit, and daughter of veteran Gwalior vocalist L.K. Pandit. Equally adept at rendering Khayal, Thumri, Tappa, Bhajan and sufi poetry, she is a popular and versatile vocalist of the country.

She has performed extensively in prestigious festivals both in India and in countries such as France, Germany, London, Switzerland , Norway, Rome, USA , Russia, and Bangladesh. Meeta was sent as the cultural ambassadress in 2004 for the SAARC Music Festival in Islamabad. She was invited in 2003 by the Government of France as Artist in Residence to be based in Paris. A film on her titled 'Meeta - Linking a Tradition with Today' has been made by (Public Service Broadcasting Trust along with Prasar Bharti) in 2005. She is an A –Grade artist of All India Radio
and conducts workshops twice a year in France , besides training many students under guru-shishya parampara in India .

Una So Mori Lagana Lagi Re