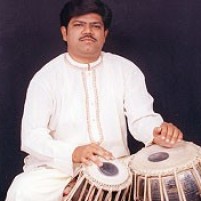 Tabla player Prashant Pandav was born into a musical environment. His father Prabhakar Pandav is a vocalist and harmonium player and his grandfather Ambadasrao Deshmukh was also a vocalist and instrumentalist.

At the age of nine, Prashant was initiated into the kirtan form of religious music from Maharashtra. He continues to pursue this form and has been felicitated by the Pune Municipal Corporation with the 'Young Kirtankar' award.

His tabla training began under Pandurang Mukhade for a period of eight years. He now studies under Yogesh Samsi, a disciple of renowned tabla maestro Alla Rakha. He received a scholarship from the Government of India.

Prashant provides accompaniment to vocal music and Marathi theatre music and plays other percussion instruments too.

He has a Bachelor's degree in Commerce and a Sangeet Visharad degree in vocal music and tabla.